Seismitoad can be a great way to round out a team in Pokemon GO.

This is primarily because of how phenomenal type combination Water and Ground is, and this Pokemon has a good list of resistances and only one weakness to Grass. While it may not be the best Water and Ground-type (it has to compete with Gastrodon and Swampert), it can still be a niche pick in the Great League.

Which moves should this Generation V Pokemon be using? 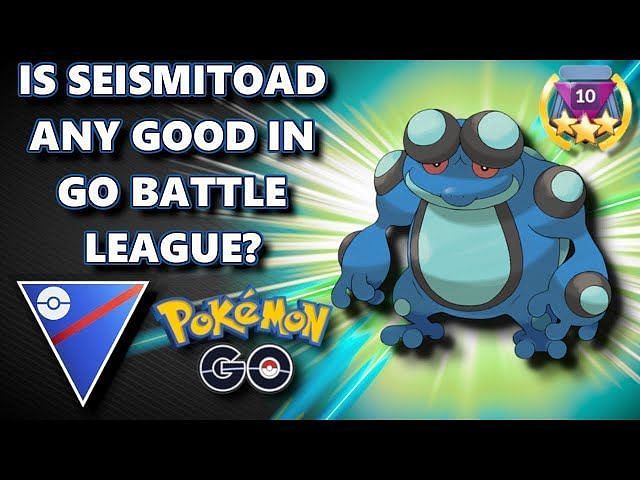 Trainers who decide to use this large frog are definitely going to want to run Mud Shot as its fast move. This is one of the best Ground-type moves for charging energy, despite having low damage output.

While Bubble does a decent 7 damage to go along with its 11 energy per use in PvP, it’s unfortunately extremely slow (1.5 seconds). This means that Mud Shot will still net Seismitoad more energy in a quicker time than Bubble would.

For charge moves, Seismitoad’s best tool is arguably Earth Power. It’s Seismitoad’s most powerful option, being base 90 power with STAB. It also only takes up 55 energy, which shouldn’t take too long to charge after spamming Mud Shot for a bit.

While it may seem like Muddy Water would be the natural choice for a second charge move, Sludge Bomb is actually the better choice. This is because, despite being a decent shield bait option, Muddy Water is kind of a pitiful move.

Muddy Water’s base power is only 35. This means that, regardless of whether it gets STAB or not, it will fail to do meaningful damage. Bulky Pokemon like Registeel and Skarmory might not even shield Muddy Water either; they can easily take the hit.

Sludge Bomb, on the other hand, hits hard as well as only costing 50 energy. This move has the added bonus of being super effective to Grass, but trainers should beware: this does not solve Seismitoad’s Grass-type weakness completely.

Being Water-type and Ground-type means that Seismitoad takes 256% damage from Grass-type moves. Any Trevenant or Venusaur with that damage is going to KO Seismitoad long before it can have Sludge Bomb charged.

Sludge Bomb is more of a surprise option if Seismitoad can farm up to it. So, if there is a Grass-type the opponent has in the back that has been chipped down, certainly Seismitoad can Sludge Bomb when it switches in. Trainers should still pair Seismitoad with a Pokemon that deals with Grass-types, though.

Over the past two years, the Forbidden Door has been a term with little meaning in the pro wrestling world. Athletes from various companies have performed for other promotions. But thanks to inter-promotional collaborations, anything feels possible. WWE wasn’t a part of those discussions until recently.

Who could it be?

There are plenty of options of who could show up inside The Dome at America’s Center in St. Louis. Sporting News looks into the potential individuals who could appear in the match that starts the build to WrestleMania.

The former Zack Ryder had people invested in him since he started Z-True Long Island Story on YouTube. Organically getting over, Matt Cardona has a loyal following. Since being let go by WWE, Cardona found a way to stand out. Cardona has worked for Impact, GCW, the NWA, and AEW. His current run in GCW as “The Deathmatch King” has resulted in him being one of the best heels in the business.

Trolling fans with WWE references during his promos, Cardona would make for a good surprise guest at the Royal Rumble, during a time when he is as popular as ever.

Another former WWE talent, the man previously known as Big Cass made it a mission to have a fresh start after being let go by WWE. W. Morrissey got in great shape and improved his in-ring skills, which resulted in him being a desired athlete. Competing for Impact Wrestling, Morrissey is a monster who has been fighting for the company’s world title. Seeing how WWE and Impact are working together, it would not be surprising to see someone else from the company enter the Royal Rumble.

Morrissey, the smooth big man, would be the perfect fit for the Royal Rumble as well.

If Impact and WWE are going to team together, you might as well go all out. Moose, the Impact World Champion, reported to WWE training camps in the early 2010s. Making a name for himself outside of the company, Moose managed to reach the top of the mountain by becoming a world champion for Impact. What better way to showcase what he can do and enhance Impact’s numbers than by having Moose in the Royal Rumble? WWE could also potentially be looking at a future employee if everything goes according to plan. Adding Moose would also play into the promos he has recently done on WWE.

While not all WWE fans may end up knowing who he is, a brief binge could bring people together to watch him and Impact Wrestling down the line.

It is unknown if WWE and AEW would do a true team-up. There is one man, however, who wouldn’t have a problem going through the Forbidden Door. After all, he has done it before. Not long ago, Chris Jericho, a former AEW World Champion, appeared on the Stone Cold Podcast, becoming the first AEW star to appear on WWE programming. When he was working for New Japan Pro Wrestling he also had a run with WWE.

While he has secured himself a role in AEW, it appears that Jericho’s influence can result in appearances wherever he sees fit. WWE would most likely welcome him back, even for one night. The former undisputed champion actually competing inside a WWE ring after everything is said and done would be quite an accomplishement, but, to many, not a surprise.

MORE: MJF sounds off on rivalry with CM Punk, learning from The Pinnacle, and his place in AEW

This feels like the more obvious pick out of anyone on the list. Sean “X-Pac” Waltman, a WWE Hall of Famer, recently announced he is medically cleared to return to the ring. He appeared on a recent GCW show and made it a point to say he would answer the phone if WWE called. A member of D-Generation X, Waltman going on another run, even if brief, just makes the most sense. He might even surprise everyone.

If you’re not down with that…

Ric Flair on the time Vince McMahon reprimanded him

Vince McMahon once told Ric Flair that he harmed his chances of being considered a WWE great due to his inability to follow the rules.

In 1992, Randy Savage defeated Flair at WrestleMania VIII to win the WWE Championship. The Nature Boy’s face was covered in blood at the end of the physical contest after he agreed to let his opponent bust him open.

Reflecting on the match, Flair said on his Wooooo Nation UNCENSORED podcast that the WWE Chairman called him into his office to discuss the matter.

“They said no blood but Randy asked me as a favor, so I cut myself,” said Flair. “That’s what he said to me, ‘Every time you get this close to being the greatest, you do something [to ruin it].’ I don’t know if he used the F word, but he [said], ‘You do something stupid.’ Let’s put it like that.” 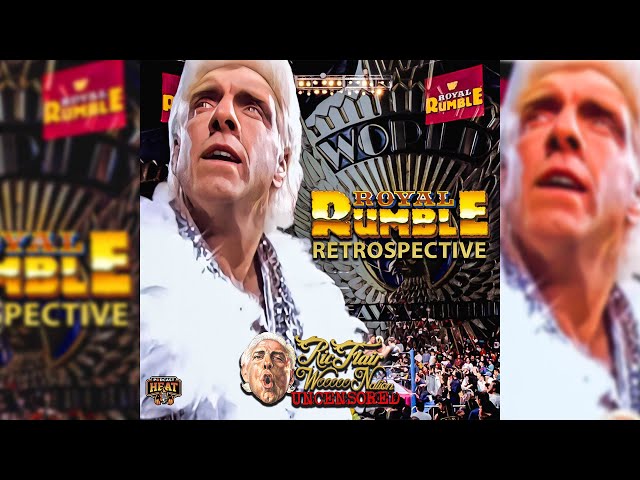 Flair’s forehead became bloodied midway through the match when Savage slammed his head against several steel objects at ringside. WWE usually replays moments from the match in black and white due to the amount of blood involved.

Ric Flair only has good things to say about Vince McMahon

Although Ric Flair was granted his release from WWE in August 2021, he did not leave on bad terms with McMahon.

The 72-year-old added that he will forever “owe” his former boss, but he cannot say the same for WWE President Nick Khan:

Flair claimed on a recent episode of his podcast that Khan “buried” him and “made things personal” before his WWE exit. According to the two-time WWE Hall of Famer, Khan was responsible for removing him from RAW during his last few months with the company.

Please credit Wooooo Nation UNCENSORED and give a H/T to Sportskeeda Wrestling for the transcription if you use quotes from this article.

Q. Should blood be used in wrestling?

Yes, in the right circumstances A fight that could turn into an all-out slugfest has been scheduled for UFC 274 on May 7. UFC president Dana White told ESPN on Wednesday that Charles Oliveira will defend his lightweight title against Justin Gaethje.

UFC 274 was originally planned to take place in Brazil but has been moved. The new location has not been announced. Gaethje told BT Sport he would have loved fighting in “enemy territory.”

“I want to go down to Brazil,” Gaethje said, via MMA Fighting. “I want to fight in the chaos. If you go back and listen to my earlier interviews, I said I wanted to go to the enemy territory, like Brazil, and fight in that chaos. Them screaming, ‘I’m gonna die,’ 20,000 people, I am 100 percent confident that when I’m done, they’ll love me. . . . I want to fight the Brazilian champion [Oliveira] in Brazil. I want the chaos.”

MORE: Will Jake Paul retire from boxing to compete in MMA?

Oliveira is coming off a huge 2021. In May, he beat Michael Chandler at UFC 262 to win the UFC lightweight title. At UFC 269 in December, he beat Dustin Poirier via submission to defend the belt. Oliveira joined the UFC in 2010 after making his MMA debut in 2008. He is 20-8 with one no-contest in the UFC and is on a 10-fight winning streak.

“Do Bronx” has recorded 18 finishes and 15 submission wins, both UFC records.

Gaethje, a World Series of Fighting lightweight champion, made his MMA debut in 2011. All but one of his wins in the UFC have been via some form of knockout. “The Highlight” is coming off a violent affair against Chandler at UFC 268 in November. Gaethje won the fight via unanimous decision.

MORE: When is UFC International Fight Week in 2022?

This would not be the first time Gaethje has fought for UFC gold. At UFC 254 in October 2020, he lost to then-champion Khabib Nurmagomedov, which ended up being Nurmagomedov’s last fight.